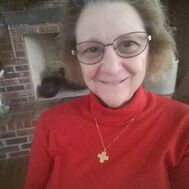 My Journey toward Iconography

In the late 1990's, after raising my children, I returned to painting landscapes and still lifes.  However I was increasingly disinterested with the subject matter and with oil and acrylic mediums too.  Then, in an attempt to find a more meaningful purpose in my art I painted a series of religious paintings.  It was during this time that my younger sister began nudging me to paint icons, but I dismissed the notion.  What little I knew about icons I learned in art history class in college, where in a four hundred page book, one page was given to the subject.

Then in 2001, I attended a private retreat to sort through some personal strife.  It was while attending this retreat that I saw a brochure for an icon painting class that was being taught later that year.  But the workshop expense seemed out of my budget, so I decided to try to paint an icon on my own.  This proved disastrous.  From that failed attempt I learned two things: that I needed to learn under the watchful eye of an instructor, and that I wanted to learn to paint icons in the egg tempera medium.  I was fortunate to find the Prosopon School of Iconology.

I immediately fell in love with the icons, the process, and the school.  The Prosopon School is a first-rate internationally renowned school, and the instructors are all master iconographers.  Through the years I have met many talented and spiritually inspiring people.  Here is a link to an amazing iconographer I also call friend.


My new found passion has bestowed upon me more graces and healing than can be contained or explained within this webpage.  My hope and desire is that by gazing upon these sacred images, you will gain a sense of the wonder, beauty and awe which inspires me to continue with this avocation.   And as for the expense of the workshops, somehow God has always made a way for me to be able to continue with what I consider to be my avocation and great passion.  All glory, praise, and honor to Him!